Effectiveness of Herbal Drugs on the Brain

Natural compounds and plant-derived products play an ever-increasing role not only in medical therapy but also in medical prophylaxis using food supplements and functional food. This presentation bridges the gap between animal studies and clinical trials using an electrophysiological approach validated for years in testing pharmaceutical preparations of chemically synthesized compounds. Common parameter in rat and humans is the local field potential as it is recorded from the depth of the rat brain and from the scalp of the human brain as electroencephalogram (EEG). These potentials - when recorded in the presence of drugs - lead to “electropharmacograms” representing the change of spectral frequency content in the presence of drugs. Feeding the results of the frequency analysis of these signals into discriminant analysis results in a 3-D projection as shown in Fig. 1 for rats and Fig. 2 for humans.

In the rat field potentials are recorded from implanted steel electrodes and transmitted via a telemetric system wirelessly to the secondary amplifiers and further transmitted to evaluation units by means of a glass fiber. The experimental design consists in recording a pre-drug base line for 45 minutes before administration of the natural ingredients or plant extracts. Recording continues for the next 5 hours. Effects are described in % change from pre-drug values with respect to 6 frequency ranges for each of the four brain areas: frontal cortex, hippocampus, striatum and reticular formation = 24 variables. Extracts from decaffeinated Green Tea, Schisandra, Ginkgo, Ginseng, St. John`s Wort, Rhodiola, Valeriana, Camilla, Guarana, Passiflora, Kava Kava were compared to the actions of caffeine, quercetin, theanine and theogalline. All extracts and single ingredients produced electrical changes, which could be differentiated from each other by feeding the data into a discriminant analysis, where the first three discriminant axes were coded into an additive colour mixture of the colours green, red and blue.  The next three discriminant axes were coded into spatial x, y and z axes. Using this method, products with a similar effect on the brain produve similar colours and are situated at a similar spatial location like seen for theanine, quercetin, St. John`s Wort. 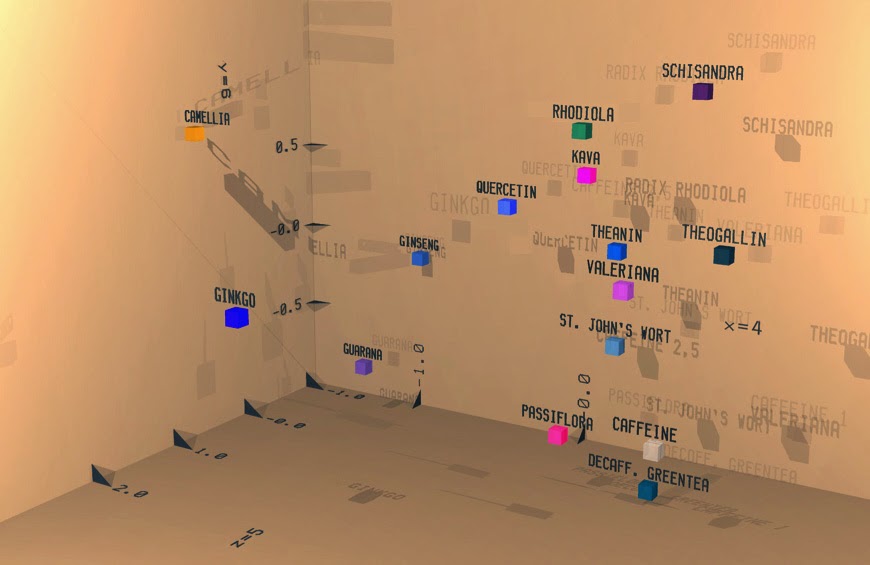 In humans a similar approach is performed with data derived from EEG recordings. Data from a lozenge containing four plant derived extracts (lemon balm, oat, lavender and hops), a drink containing ginkgo and ginseng as well as a decaffeinated green tea extract and a tablet containing passiflora were tested within a similar experimental design in comparison to placebo. After base line recording, administration of the extracts was followed by hourly recordings of  5 minute duration under conditions of “eyes open”. The data from the electropharmacograms (17 electrode positions times 6 frequency ranges = 102 variables) were fed into a linear discriminant analysis. It could be shown, that the actions of the four preparations were entirely different from placebo. However, the hourly recordings within one trial showed the same colour. This proved the extremely high sensitivity of the method and the consistency of the observed effects. 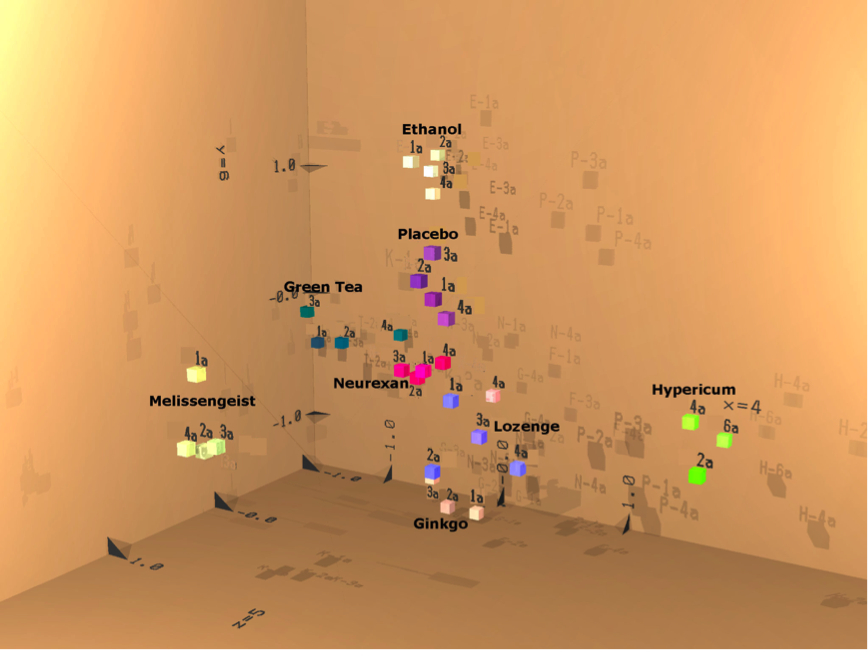 The data document, that field potentials from rats and EEG from humans are valid parameters for the description of effects of natural compounds and plant derived extracts on the brain.